As an extension to our worm unit, we wrote diamante poems about worms.  This is easy, fun, and a nice little writing activity that introduces the children to a different poetry format.


So what is a diamante poem?  It's basically a poem in the shape of a diamond.  Here's how it works.

Our four line diamante poem is a modified version.  If you'd like more examples check out ReadWriteThink, by clicking on the logo below.

For our lesson, we started with the noun, worm.  Then we brainstormed adjectives and action words ending in ing that described a worm.  Finally, for line 4, I asked the children to imagine that they had a worm as a pet, and to think of a name for their pet worm. Here are a few examples of our poems. 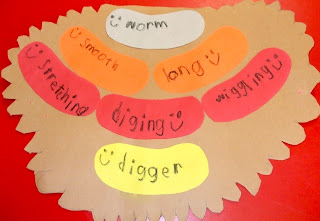 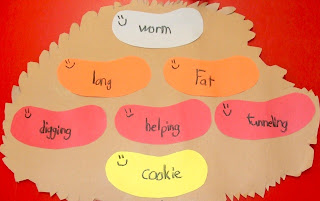 And now it's time for a few more gummy worms! Dee
Hello and welcome to my teaching blog. I am a first grade teacher in the lovely pine tree state of Maine. I hope you find a few ideas or activities here to take away. Thank you for stopping by!